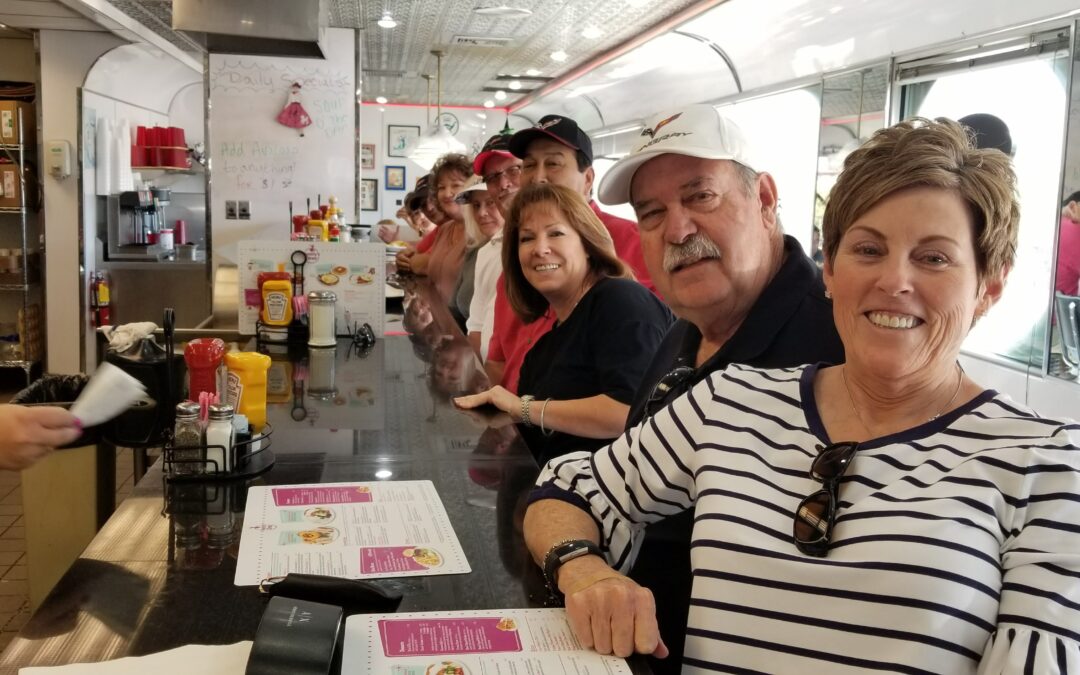 A group of five Corvettes and ten COB members recently traveled to Prescott, AR and entered the Annual All Corvette Car Show hosted by the Prescott Vette Sette. We met at the Shell station at Comanche and Hwy 58 and traveled to Peggy Sue’s just outside Barstow for lunch at the 50s style nostalgic diner. From there we traveled on to Laughlin experiencing a short stretch of old Route 66.

The next morning we set out for Prescott with a quick stopover in Kingman to visit the Arizona Route 66 Museum and shop for souvenirs at the Powerhouse Visitors Center. The museum features several displays of vehicles, clothing, and artifacts to demonstrate the many challenges early travelers faced during their journey west. A small movie theater features a video of the history of Route 66 in Arizona from a dirt trail to the final I-40 bypass.

Our stay at the Hotel St. Michael in Prescott was a special experience. Rumored to be haunted, it was built before automobile and featured an old Otis traction elevator, the hotel reminded us of traveling in days past. The elevator was quite the experience, especially when it failed on our last day providing us an opportunity to exercise and tote our luggage down the stairs.

The three day event kicked off Friday evening with a Pub Crawl through historic Whiskey Row which included taverns, night clubs and fine eating establishments; several with live bands. Thank goodness we didn’t have to buy an adult beverage at each place or we would have been crawling for sure.

On Saturday, 275 Corvettes were on display around the courthouse square and COB cars were staged front and center on Whiskey Row. While we didn’t take home any trophies, we did hear lots of compliments.

We all got up early on Sunday for the poker run only to discover that Larry’s C7 had been damaged sometime overnight in the parking garage. Someone left a note saying that a truck had cracked the right front fender and left. It didn’t take a keen eye to figure out the note writer and the culprit had probably stayed at one of taverns too late. Hopefully the Prescott PD can find the truck’s driver so Larry won’t be out the deductible.

The “See Why We Love Prescott” poker run was designed to show off the many wonderful sights and beautiful areas in and around Prescott. Unfortunately some of the roads were more challenging than the Vette Sette originally intended and Bill’s C6 suffered some bruises to the side skirts. Lesson learned for next year’s run: Always pre-run the poker route as close to event day as possible in a Corvette. Chris and Liz got to celebrate as they won the prize with three aces.

Next we were headed back to Laughlin and at Danny’s request, we took the high road (5242 ft elevation) and traveled 87 miles on old Route 66 between Seligman and Kingman. Every May, this road is part of the annual Route 66 Fun Run which drew nearly 800 cars of all kinds in 2019. Danny wanted to scope out the venue for a potential future COB event. The group stopped for dinner at the Mojave Steakhouse (a local favorite) in Bullhead City. After a great steak, we enjoyed a night of relaxing for some and gambling for others in Laughlin.

On Columbus Day we set out for home with a quick photo-op at the High Sierra Oasis, an old Route 66 stop near I-40 and then lunch at Penny’s Diner in Barstow, a 50s décor café in what appears to simulate a railroad car. We had a wonderful holiday weekend, we saw some great scenery, ate some awesome food, and shared lots of laughs.