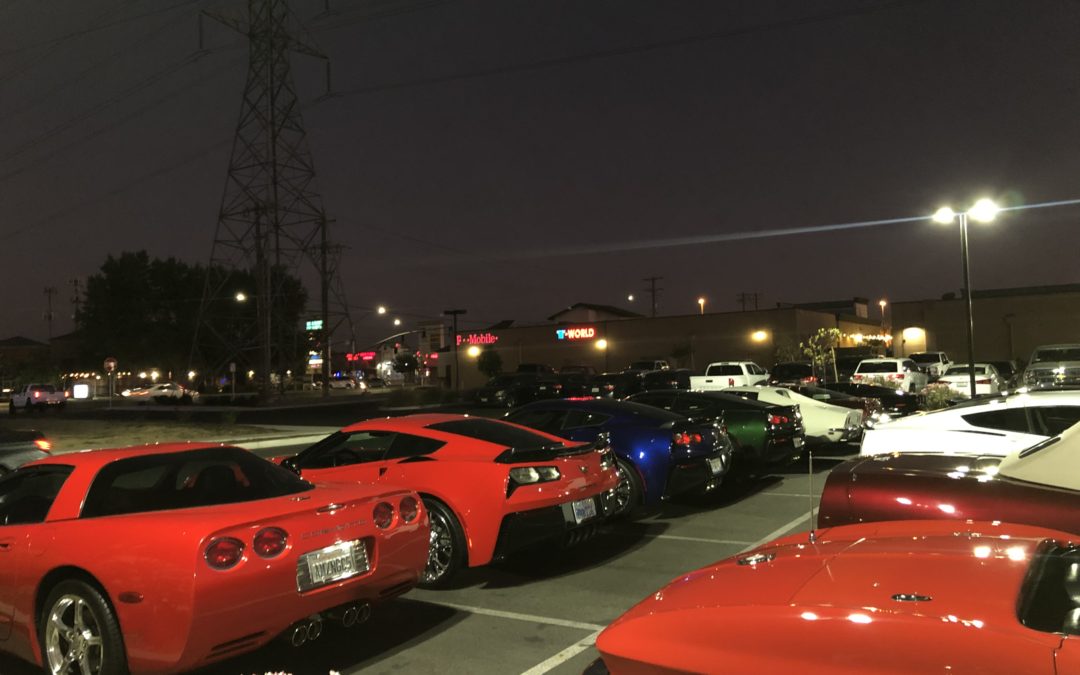 Many thanks to Danny Ellison for organizing last night’s club event where over 30 Corvettes of Bakersfield members enjoyed an evening of Corvette Camaraderie at Firehouse’s Friday Night Graffiti. 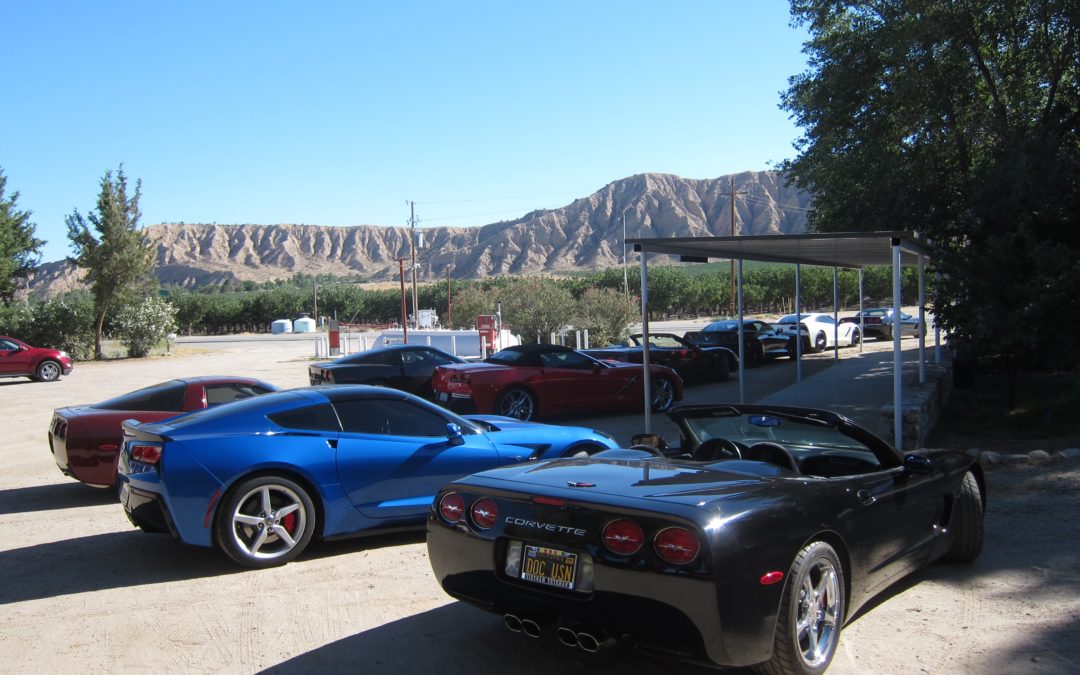 Much thanks to John and Cher for putting on a great run to Ventura and Camarillo. Our adventure began with a pitstop at the Santa Barbara Pistachio company on 3380 Hiway 33 in Ventucopa. The Santa Barbara Pistachio Company is well known as “the Original Home of the Flavored Pistachio”. The naturally tree ripened organic pistachios are grown in Santa Barbara County in a farm solely owned by the Zannon family. This wonderful little business had the best tasting flavored pistachios.

As we proceeded on our way to Ojai, an incident happen to one of our fellow travelers. Stephan and Rachel, prospective members of COB, ran over a rock and bent their oil filter leaking oil all over the road. Not a very good memory too have on their first run. Fearing their oil pan was cracked, they called a tow truck and were towed back to Bakersfield. Thankfully, it was a minor fix and they proceeded to become full-fledged members of Corvettes of Bakersfield.

The rest of the gang proceeded to Ventura to the Aloha Steakhouse right on the Ventura Pier. The service was outstanding and the food… delicious! A funny incident occurred when we were enjoying our meal in that there was a rumor that a man was sitting on the bench observing the ocean in the nude. After much debate Tina Pucilowski decided to go out and see for herself if he was, actually, nude. Of course, he wasn’t. He was wearing khaki colored shorts and everybody had a good laugh about it.

After the meal, some members headed out to the Camarillo Premium Outlet Shopping Center  to look around and shop. Others decided to split up and go sightseeing or visit friends and even spend the night in the Central Coast. 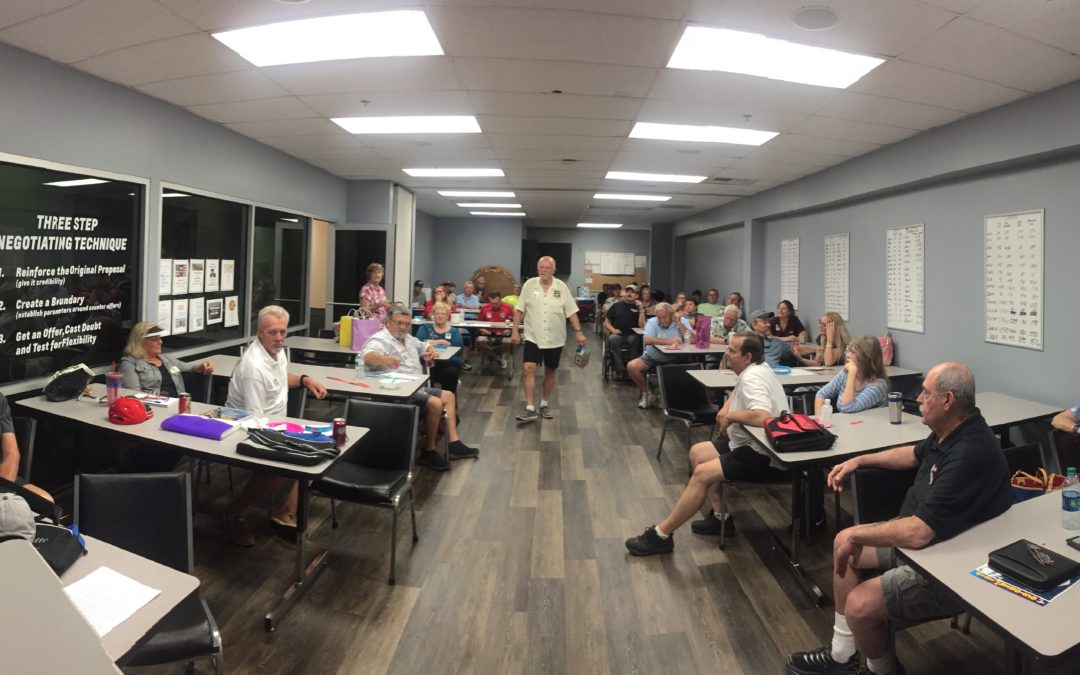 We had another full house at our monthly meeting tonight. We are preparing for our Camarillo run this weekend and making big plans for our Annual Wine Run to Paso Robles and our Vettes for Vets car show to be held on November 9th benefiting four of our local veteran charities. A nice video of our run to Greenhorn Grill was presented by Danny Ellison and was enjoyed by all. Annie Bailey supplied the snacks tonight consisting of deviled eggs and drinks and fruit salads. Tony Sparano also brought some cookies. Congratulations to raffle winners: Brad, Tony (twice), Myna, Michael R., Tom, Matt, Kathy and Mike. Boy did we have a lot of prizes. A big thank you to Dale for supplying the raffle prizes.

Gamblers’ Classic:  Larry advised we have officially released the hotel in Laughlin for Gamblers’ Classic 2020.  An idea was brought up to reach out to the Hard Rock Corporation and look at having a similar event at the new complex that is scheduled to be built off of I-5/99 Hwy.  Bill said he will reach out to the Hard Rock to see what timeframe we are looking at and the procedure we would have to follow.

Streets of Bakersfield:  Carl has 12 prepaid parking spaces reserved for next year’s event.  Please contact him if you are interested.  Corvettes of Bakersfield is scheduled to be placed one block from the grand stands this next time.  Greg Brott is still our liaison.  Dave Kielty has been attending meetings.  The event is scheduled to occur 3/19-3/21/2020.  Larry to do some follow up.

Membership:  There was major, and somewhat contentious, discussion about accepting new members online.  Some felt we should only accept new members after meeting them and the potential member attending a couple of meetings or events.  Others thought that, in this day and age, the younger crowd uses computers for almost everything and that the online process saves time.  Bylaws were referred to where it states that new applicants will become eligible for membership after 60 days from date of application.  Name tags will not be ordered until the prospective member is approved.

There use to be a membership packet that was issued to new members that included, at a minimum, a club sticker, copy of the bylaws and a newsletter.  The membership committee will be working on updating this packet.

Bylaws:       Virgil stated that we need to set up a time to align the two sets of bylaws, (501(c)3  and 501(c)7).  Currently, they have two different timeframe lengths for the officers to hold office and the same set of people hold offices for both, causing conflict.

Also, when we set up the 501(c)3 corporation,  the board was told it was supposed to go thru training.  That never happened.  Do we still need it?  Carl pointed out that the board has a fiduciary responsibility to the club.  Larry and Carl will get together with Zelma and determine what needs to be done and set it up for the board of directors.

Insurance:  WSCC vs NCCC.  Larry advised we can’t do anything until next year because, calendar-wise, we have already passed the open window for this year.  There was major discussion about pursuing a change, headed by Danny.  It was determined that Greg Brott, as our governor for NCCC, needs to encourage NCCC to accept electronic copies of our events vs US mail delivery.  While not confirmed, Betsy said she didn’t think her former southern California club used US mail as the primary means of communication with NCCC.  Maybe there was a communication issue?

Quarterly Audits:  Carl wants an outside auditing firm to do quarterly audits of the club’s books.  He has been in contact with Donna (unknown last name), a bookkeeper, who is willing to do it for no cost to the club.  There were no objections.

Committees:  Per the bylaws, with the recent change of officers and board of directors, some of our defined committees need to re-establish members.  At the direction of Larry, the current committees will consist of the following:

National Corvette Museum:  Carl moved that we join this “quality organization”.  The cost would be $250 to join and $150 annual renewal.  We would get access to their national magazine and could advertise, at a cost, in it.  Danny seconded the motion.  After discussion, it was decided this issue needs to be taken to the membership and will be put on the next agenda.

Vettes for Vets:  Virgil handed out a copy of the budget for the car show.  Twenty rooms have been blocked at The TownePlace Suites by Marriott for our out of town guests.  A $30/night savings will be extended to those participating in the Veterans Charity Car Show. The block of rooms and the rate will be held until 10/11/2019.

It was asked if the car show was sanctioned through NCCC, or if it needed to be.  Virgil will talk to Greg.

Events:       Danny passed out a Calendar of Events for 2020.  He requested everyone look it over and volunteer for openings.

Liz wants to pursue a local membership run, take pictures of cars, license plate numbers and members, so members can be identified via their car when on runs.  Liz’s idea is to do pictures out at Hart Park, then maybe drive out to Nickel’s Ranch out towards Rio Bravo and then back to Bakersfield via Moo’s Creamery.  More to follow.

Wish to thank Yolanda Atkinson for the C8 reveal tickets she obtained from WSCC and shared with club members. 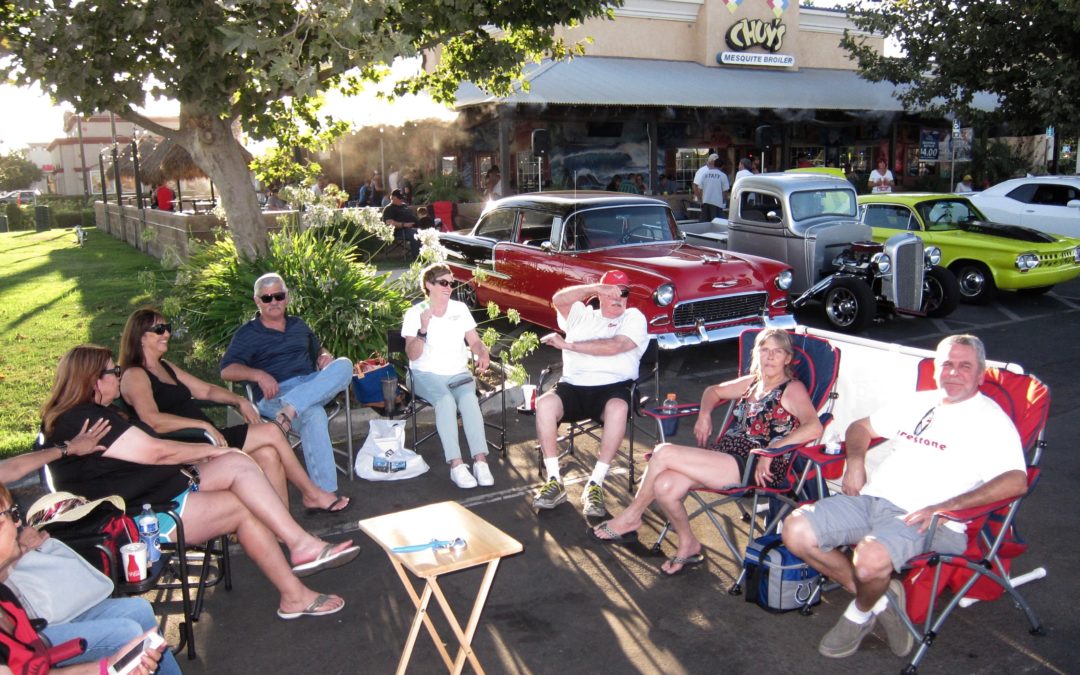 We had a very nice, more like warm, afternoon at the Corvettes of Bakersfield monthly gathering at Chuy’s. 14 Vettes, a couple of non-members included, were lined up nice and pretty and as the evening wore on, things were starting to get a lot cooler. After a nice meal at Chuy’s, we had some delicious root beer floats. Thanks to Chris and Liz for bringing the root beer floats for all of the members to enjoy. Ice cream is becoming quite a popular treat for our gatherings; it is very well received. Daylight is also becoming apparently shorter and everything started to break up by 8:30 PM.