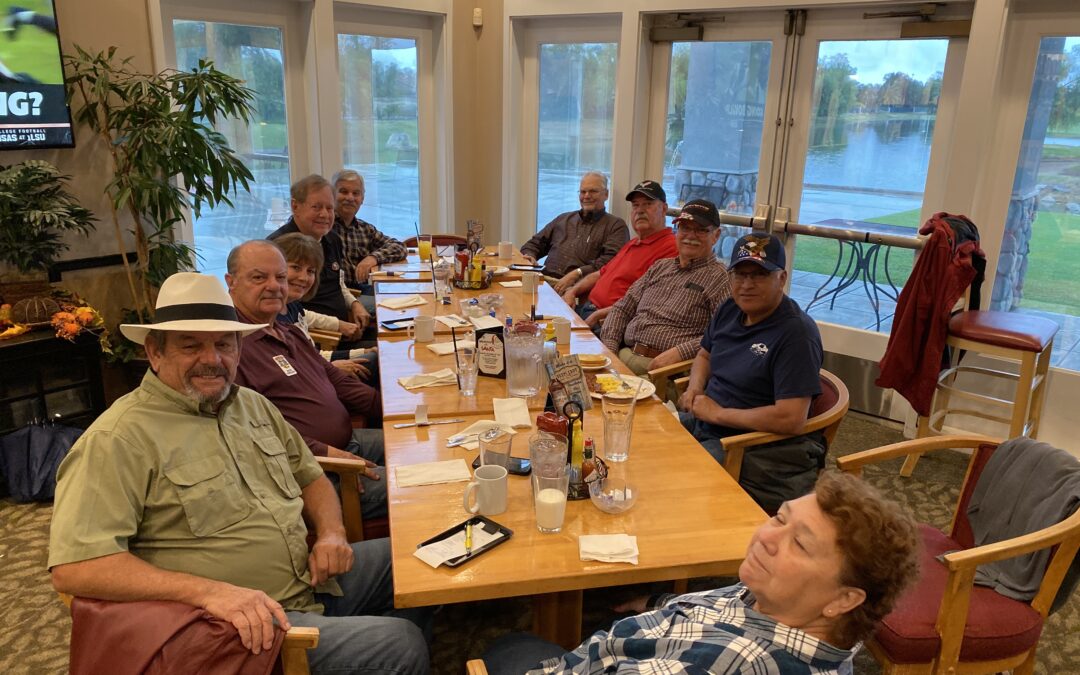 COB/COB at the Riverlakes Links

We had another fine COB/COB at the Links at Riverlakes Ranch clubhouse on this fine, rainy Wednesday morning. Three brave souls brought out their Vettes to share with us. Lots of talking and information was exchanged and on top of that we had a fine breakfast. Everyone is invited. Join us every third Wednesday for our COB/COB. Corvettes of Bakersfield Corvette Owners Breakfast. 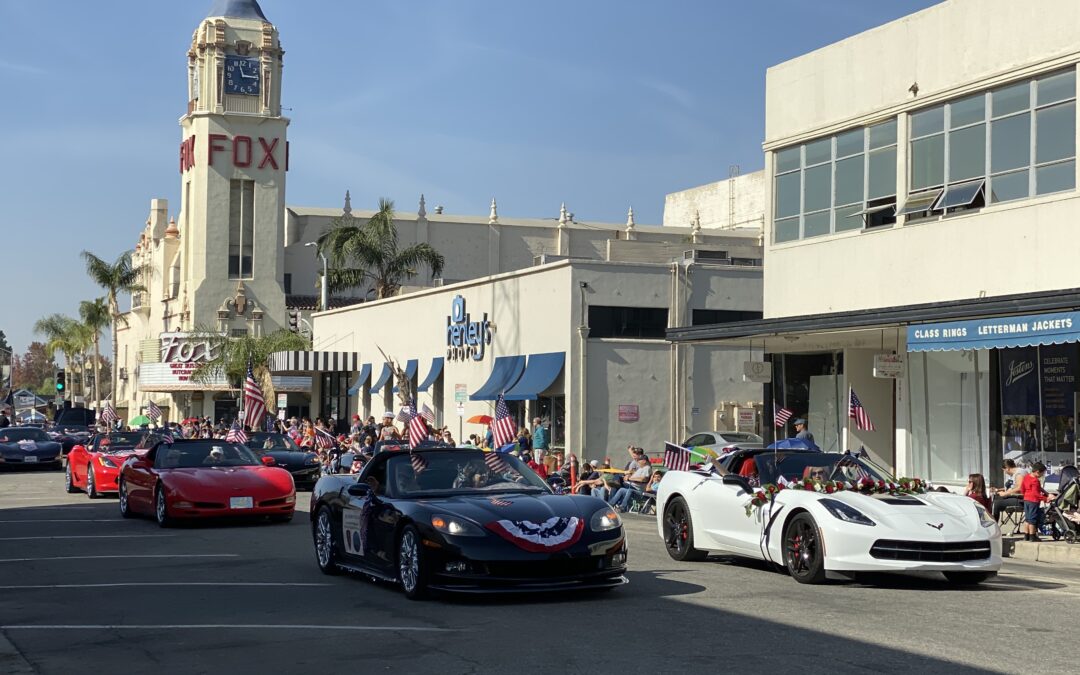 What a totally awesome and fun way to honor our local veterans by participating in the annual Bakersfield Veterans Day parade. 20 Corvette owners from the Corvettes of Bakersfield carried veteran friends and family amongst the thousands of people lining the streets of downtown Bakersfield showing love and respect to these men and women for their service and sacrifice for the great USA.

We started out with a breakfast at the American Legion Hall where veterans can be overheard swapping stories of their youthful endeavors. Later on, the Vettes were all decked out with American flags and red, white and blue decorations. As we proceed  with the parade, it’s always a joy to see the kids shouting “Thank you” and waving to the passing veterans.

After we ran the parade route, we took a quick drive to Mexicali on 18th Street and had a delicious lunch. A special thanks to Rod and Bev Hayden for the wonderful gift they gave to those who attended the lunch at Mexicali. They are truly special people.

6:36 P.M.  Meeting called to order by President Larry Young.  Larry thanked our sponsor, Three Way Chevrolet, for the meeting room and the monthly financial contribution to the club.

New Members:   Von Schipper and Diane Wallace were in attendance.

Larry Young/President:  Thank you to Tony Ennis and Chevy Garza for a great wine run.  There were more first-timers in attendance than “old-timers”.

Membership – we have 115 current members.

Treasurer report – Larry showed the numbers as Carl is not here.

Kim Miller/Secretary:  Nothing new to report.

Dave Kielty/Sergeant At Arms:  Streets of Bakersfield will have some new “stuff” going on this year.  More to follow.  COB will be doing the street marking.

Liz Zaninovich/Public Relations:  Have been handing out flyers for the car show.  A lot of flack has been received on the cost of the show entry fee.

Danny Ellison/Events:  Ventura Fun Run – $60 was collected in the raffle, making for a total of $1,431.00.  Events are posted and emailed on the first of the month.  There will NOT be a January events planning meeting in 2020.  The 2020 Events Calendar is out.  The last Saturday of each month has been left open for “fun runs”.  If you are interested in planning one, contact Danny.

Car Show:  Virgil showed a PSA for the event.  After discussion, members voted to cancel the show.  Virgil will make notifications and return donations that have been received.  ($500 Kern Schools, $250 Fastrip, $300 Stone Chevrolet, large screen TV from Banducci’s Pumpkin Patch).  Virgil suggested, for the future, maybe we can look at a “Gambler’s Classic” style event at the new Hard Rock at I-5/99 after it is established.

Veteran’s Day Parade –  Tony Ennis advised there are only 18 members left in the MOAA and of that only five are ambulatory.  Tony suggested we contact the American Legion.  Larry volunteered to go with him

Next month – Next month Kathy and Henry Gallego are signed up for snacks and Donna and Danny Ellison have prizes for the raffle.

Veterans Parade:  Are we going to participate?  We will wait until the general meeting to hear from Tony Ennis before making a decision.

NCCC:         Linda McNitt is our new NCCC governor.  Linda and Greg Brott have plans to get together on Thursday to discuss the role.  Larry shared his experience at the 9/14/2019 meeting.

Christmas Party – This year’s event will be held on 12/7/2019.  Dues to our insurance, the club cannot provide liquor to the members.  Larry advised that we have hired Jason Brower of Party Brokers to serve alcohol at the party.  He has insurance and a liquor license and meets NCCC requirements.

Veterans Charity Car Show:  Virgil advised that logistics-wise we are on track.  At this point, there has not been very many entries.  Virgil contacted Yolanda Atkinson regarding t-shirts.  She said she needs 2-1/2 weeks notice along with the number of shirts and sizes in order to place our order.

Christmas Parade:  No corvettes this year.

By-laws:     Kim Miller spoke to Zelma regarding the possibility of amending the 501(c)3 bylaws to align the length of terms for officers.  Zelma said it only had to be approved by the executive board and documented in the meeting minutes.  General membership does not need to be a part of this.

Further discussion ensued amongst the board members suggesting that the term of the Treasurer should be a two-year term while the other officers could remain at a one-year term.  Kim said she would put together a couple options for the board to consider and get it to Larry as soon as possible.

Financial Report:  Larry passed out the report (Carl had to leave early).  Between the two accounts, we have $25,547.99.

Membership:  We recently lost a member, Steven Mathias Jr.  There will be a wake on 10/6/2019 at The Firehouse on White Ln.  It has been requested to have some corvettes there.

Larry would like to see one specific person (director) be responsible for taking care of cards, flowers, etc. when there is an occasion such as this.  Betsy will order flowers tomorrow.  Also, as an update, Barbara Compton is doing better, per Larry. 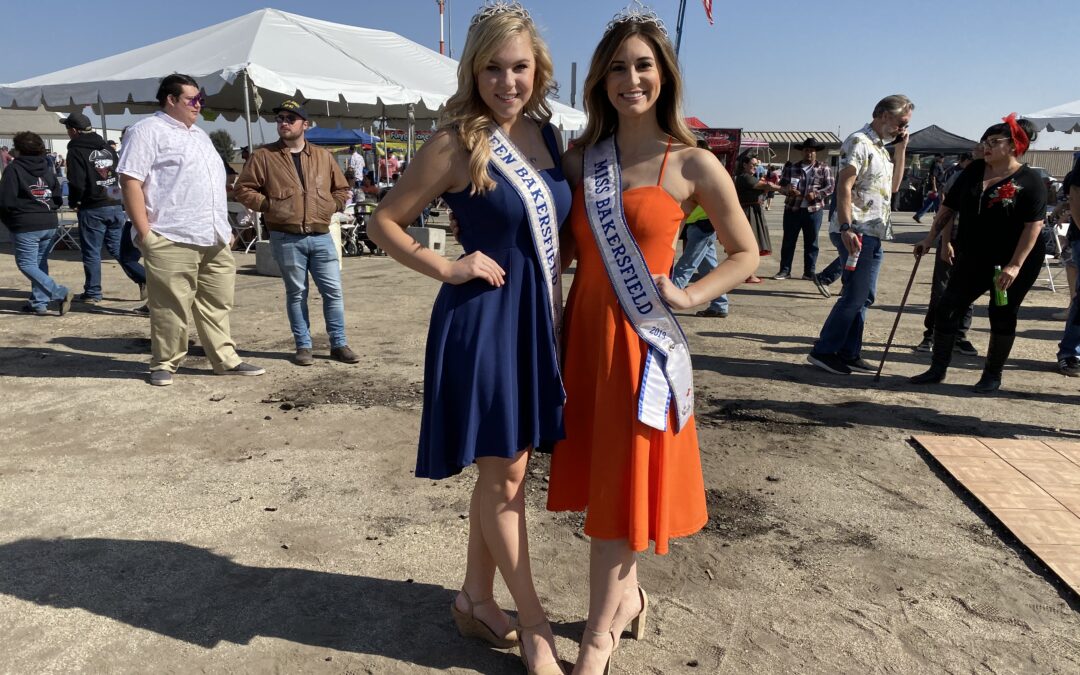