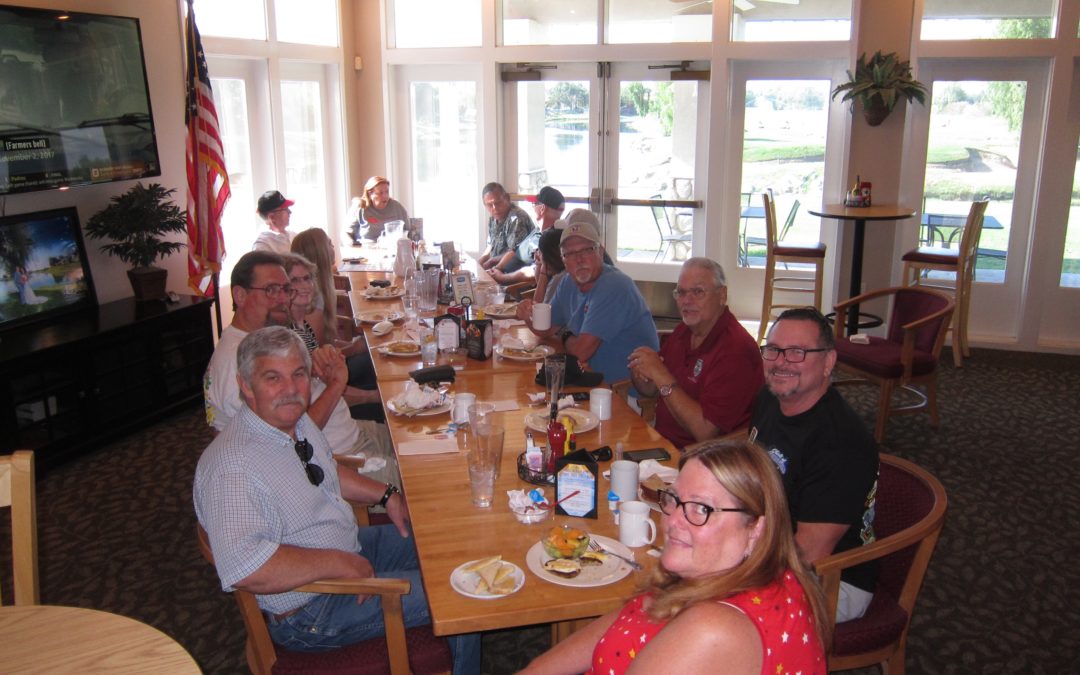 At today’s Corvettes of Bakersfield Corvette Owners Breakfast we had quite a few members attend including some new members who have made this their first event. Thank you Boyd and Lorena for joining our club and we hope you have a great time with us. In other news we are planning events and runs for the coming months. Stay tuned with us. 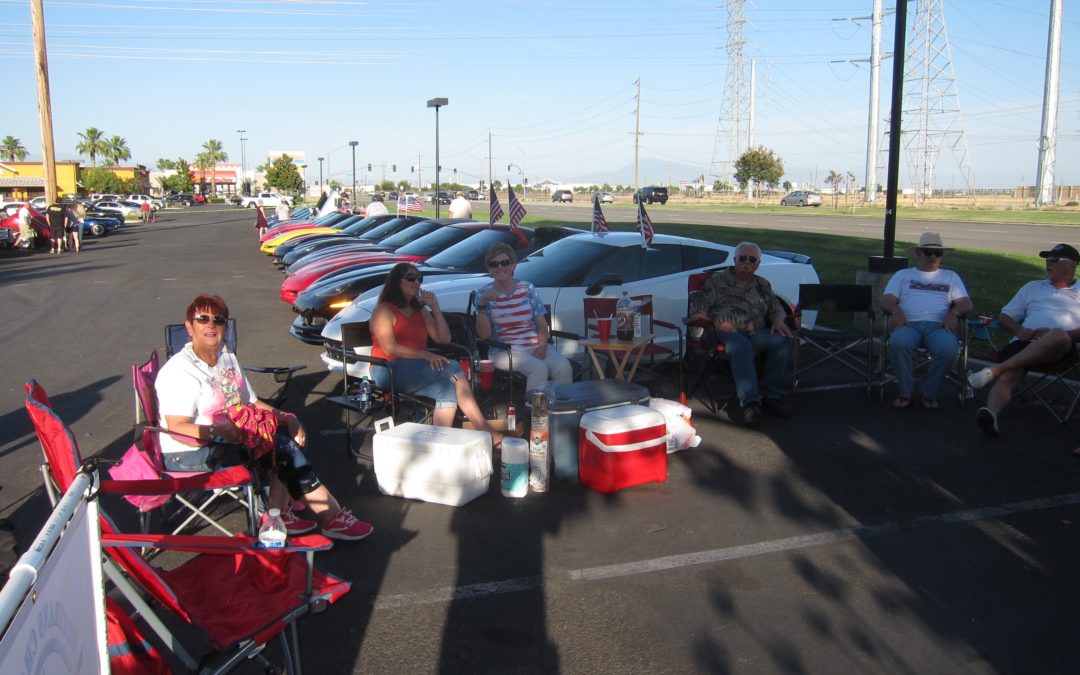 We had 17 member Corvettes in attendance and 4 others who are not members or were members to be at the Chuy’s Thursday Night Cruisin. Root beer floats were served and a good time was had by all on this very warm evening. We got there early enough to have a very nice spot with shade from a large tree. One of our members to be even brought along a gorgeous ZR1. Thank you very much to Donna and Danny for supplying the delicious root beer floats and to Lillian for helping to serve. We will do this again soon. 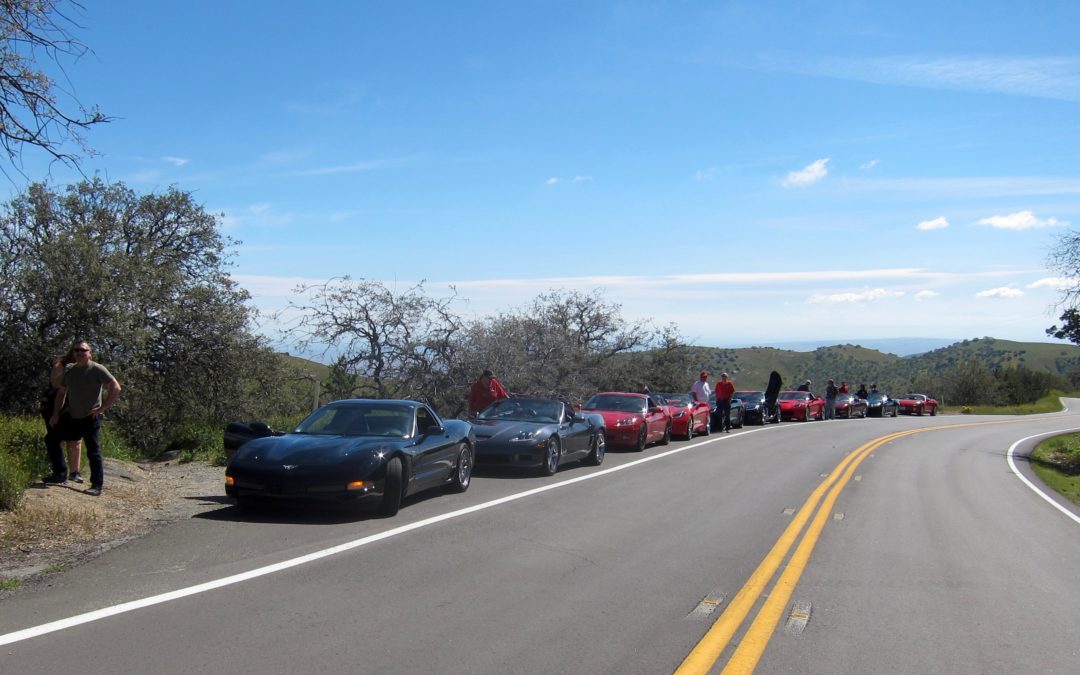 The weather couldn’t have been any better. Originally The Trembler Run was a much longer run taking us, starting from Bakersfield, to Coalinga and San Lucas. Then we would have headed south through very sparsely used country roads through beautiful countryside along the San Andreas fault; had lunch in Paso Robles and more cruising along little used scenic country roads where we were to do more sight-seeing and then home after a full day. Unfortunately the threat of rain and flooded roads canceled that event. As a last minute endeavor to do something and to see wildflowers, 10 intrepid drivers (one in a Pontiac Solstice) made a last minute run through Hiway 58 straight through McKittrick to the Carrizo Plain National Monument. All alongside the road we saw an awesome display of God’s beautiful, colorful creations. We would stop to take pictures of everything from our cars to the multicolored mountain sides. Anytime you get a bunch of beautiful Corvettes together, you have an instant car show that attracts kids and adults alike. As a matter of fact, we had some beautiful and excited Asian gals all the way from Los Angeles taking pictures of our Vettes so we invited them to sit in one for a picture setting. They were very entertaining and had a great time.

Afterwards we drove back to McKittrick to have a wonderful and much needed lunch and to recount what we had seen. We stopped at the McKittrick Hotel and Penny Bar owned by Mike and Annie Moore. In that rustic old building, established in 1898 and rebuilt in 1903, we saw a plethora of kitschy sayings, proverbs and artifacts but mostly we saw pennies…”Starting with a large bucket of pennies, the Moore’s begin decorating the bar, the walls, the sign in the front of the building, and just about any flat surface he could glue Mr. Lincoln. Over 1 million pennies later, the Penny Bar’s unique beauty has achieved a fame that has stretched from coast to Coast. Television and newspapers have done stories about this unique establishment which has brought fame to this icon of a very small Kern County town”.

For a run that was organized at the last minute, this turned out to be a beautiful and wonderful experience. Many thanks to John and Cher for getting this together. For more pictures, click on this Flickr link:
https://www.flickr.com/photos/158760832@N02/albums/72157679769347628 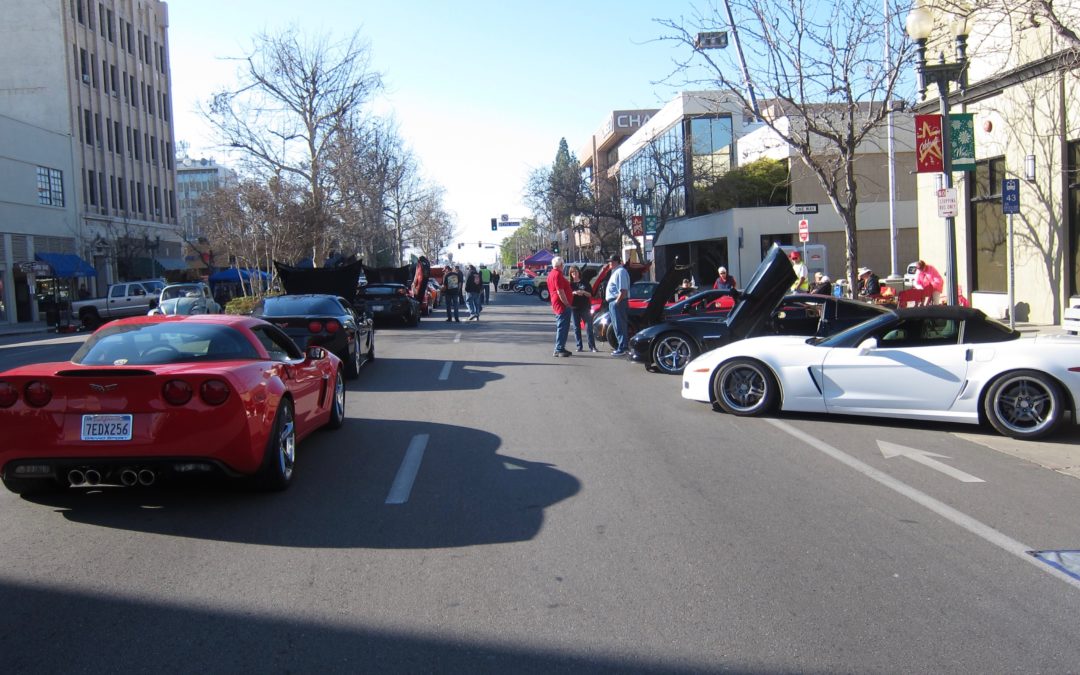 We had a totally awesome time under the most perfect weather imaginable at the Streets of Bakersfield car show. Many thanks to David Kielty, Bill Dean, Larry Young, Richard Villanueva, Mitch Townsend, Virgil Miller, Dale Frye and Adrian Medina for the hard work of chalking and numbering the streets for the gorgeous cars being displayed. Corvettes of Bakersfield had 12 members show up in their Corvettes as well as other members bringing their other prized cars. Many friends were made and possibly new members for the club. In spite of three other car shows going on in town, we had a record 400+ cars registered at the Streets of Bakersfield show. Our charity of choice was the Wounded Heroes Fund among five other charities benefiting from the proceeds of this show. Plenty of vendors and entertainment was available and lots of food. This show gets better every year.

Sunday, March 10 was a great day to have a Corvette car show and brunch at the Tower Bar and Grill on Truxtun Avenue. Under Puffy clouds and cool weather, 21 Corvettes gathered for our first “Concours De’ Brunch of Corvettes”. All the Corvettes were lined up with their hoods up to show off exquisitely detailed engine bays and special accessories. Each Corvette was judged on several criteria and three trophies were given out. First place was awarded to Jack and Yolanda Atkinson for their wildly modded C6; second place went to Gregg and Carol Brott for their elegant Z06 and third place went to Virgil and Kim Miller for their well preserved vintage 1954 Corvette.

The Tower Craft Bar and Grill was first established as the First Baptist Church in 1932. The steel reinforced structure survived a major earthquake in 1952 and has seen several different businesses and restaurants occupy it over the later years as well as concerts. It is registered in the U.S. Department of Interior National Register of Historic Places. The elegant bar and grill served a delicious lunch to all the COB members by friendly and helpful staff and a good time was had by all. For more photos of this event, click on our Flickr page.